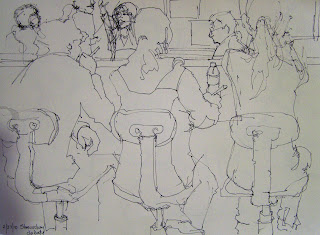 I spent most of yesterday with our high school debate team.  It's wonderful to see hundreds of exuberant teens being teens for the day; wearing business attire, and competing intellectually.  Lots of research, writing, and thinking on their feet.  This month's topic:

Of course,  the 2000 election and subsequent recount in Florida were a big part of the arguments.  Loved hearing the kids argue about this event which dominated our news coverage yet the oldest of these students was in 2nd grade.
Teams prepare both pro and con positions and speeches; and it is determined via coin toss during each round which side they will argue.
Here are some continuous line contour drawings  I made when our team was brand new and we observed some debate rounds. Captive audience, and thirty-three minutes to draw! 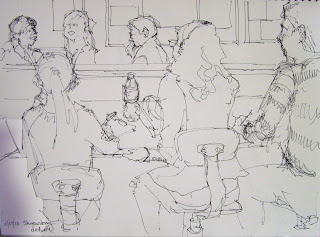 Check out my math blog!

Search my blog by topic:

Some of my favorites

All images reproduced in this blog are copyrighted by the artist, Jody Regan © 2015. No image may be used or copied in any manner without the artist's express permission. All rights reserved.