Four times each year I have a passing thought that the equinox or solstice is several weeks misaligned from the actual onset of that season's weather.  It's only a passing thought, appended to the quarterly recognition that the current day IS the equinox or solstice.  This year in New England, however, equinox and weather have missed one another by months, not weeks.

"Spring Reflections" is a painting from a more traditional spring.  Many of my landscapes are vertical, although we live along a beautiful tidal river, adjacent to the ocean and layer upon layer of  gorgeous horizontal vistas.  I see these expanses in vertical slices.  My thumbnail sketches are both vertical and horizontal, as I contemplate design.  Most often, I choose the vertical.  My goal with this painting was to show the solitary existence of this iconic house along our tidal marshes.  A horizontal painting would not have captured its isolation both in foreground and in the distance.  It really is an outpost.

The house was reflected beautifully in the calm marsh tributary, and I blocked it in quickly, along with the rectangular marsh shapes.  Those are simply washed in, and stayed that way into the finished painting except for the addition of a bit more color.  Good thing I blocked in rapidly , because within half hour a breeze had picked up - no more reflection.   About 40 minutes after that, tide was in, no more marsh! 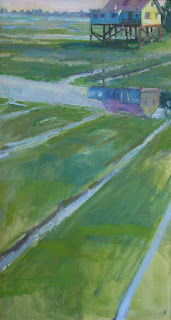 I made a few changes to the geometry of the marsh in my next visit to the site, creating more diagonals as a scaffold to climb into the painting.   I also bumped up the greens, appropriate to the marshes two weeks later into spring.  The house had NOT grown a new room in those two weeks.  It was an early omission - no explanation. The painting is much more successful with the extra room, more interesting silhouette, and small ticks of sunlight to draw the eye into the painting.

Proportion and distance can be challenging to some students.  It is important to measure the size of the distant houses against the solitary cottage to see how small they are, usually much more diminutive than students see them.  There is some wiggle room in the size range because the distance can be as far as you want it to be but when the distant structures are too large, it breaks the perspective, and, as with other perspective errors, is obvious. Other late changes to the painting:  I warmed the shadow directly below the cottage, and cooled it as it crept out under the sky, and adjusted the color of the reflected light on the shadow side of the house appropriate to the addition of blue and green in the marsh.   Looking forward to heading out to the marsh this week. 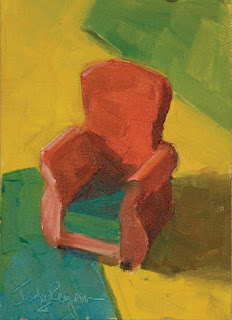 Another in the series of quick paintings I've been doing.  I like toy chairs, and have collected a few.  This carved wooden club chair is about 3 1/2 inches tall and has a green partner.  I'm enjoying the color and shapes of these interesting objects. 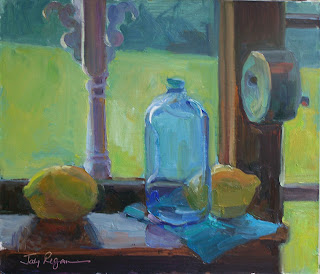 We continue to explore color in my oil painting class.  Yesterday's lesson was about painting through colored glass.  We looked at examples of the "in, on, through" of glass, and the influence of the color in single and double layers as  you look through it.  I encouraged my students to begin with several large shapes determined by color and value rather than by objects.  Wow!  Great results, including some harmonies that reminded me of Thomas Dewing's turquoise tonal paintings. 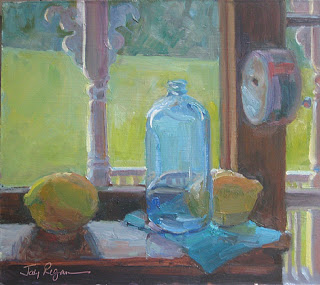 I was looking in my files for a painting that would support the lesson, and was happy to discover two versions of  "Kitchen Ledge", painted in Maine alongside my friend Kelley MacDonald, in the coastal victorian house we rented with several artist friends.
I wanted the painting to give a sense of welcome, and the period of the graceful house.  When I brought it home, the porch column (in the top photo) seemed incongruous with the simple pine shelf and window trim.  I decided to add another column and an indication of the porch railing which I had originally added going all the way across the painting, and through the bottle.  However, it created an awkward tangent with the top of the lemon, so I removed a third of the railing.  My motivation was removing unintended geometry, but the result had an added bonus of implied stairs below the window where I could imagine a guest stepping up, onto the porch and into the rustic kitchen to share a cup of tea (with lemon?).  Will be back in this lovely spot for a week in June.  Lucky me.

Check out my math blog!

Search my blog by topic:

Some of my favorites

All images reproduced in this blog are copyrighted by the artist, Jody Regan © 2015. No image may be used or copied in any manner without the artist's express permission. All rights reserved.